Some years ago we took in a senior aged stray cat I found on the road.  He was in a pretty bad way and when taken to the vet his initial prognosis was not good.  After surviving the first 48 hours, the vet spent three weeks stabilising him prior to “Sidney” the cat moving in with us, having discovered that he had untreated diabetes and happily responded well to treatment giving us three healthy happy years together.

At the start when I collected him, I was taught how to administer insulin injections and advised “he is very feisty”, the nurses had been having particular trouble taking blood samples.  He had been very timid when I had picked him up off the road, so I figured his mood change was a positive sign of him becoming stronger.

A less that desirable response!

On arrival Sidney was so over-excited to be in a home he snuggled up with me purring loudly for around a minute before turning and sinking his teeth and claws deeply in to my hand and wrist.

I calmly extracted myself from his grip and he then ran to block my exit from the door hissing and snarling.  I guess he had his reasons for this and the funny little chap repeated this door blocking exercise several times throughout the day.

Having worked at an animal rescue centre during my twenties with an excellent behaviourist Angela Stockdale, I’d observed a vast range of  responses in cats, dogs and horses (plus others) and I had noticed how Angela would treat each animal with respect and recognition.  She would reassure them and take responsibility for how her actions might impact upon them.  It is in fact partly my experiences with Angela that eventually led to me training in NLP (even though Angela would not label her approach NLP).

I reminded myself of the NLP presupposition “people (in this case cats) are not the sum of their behaviours”.

I spent the day observing Sid and allowing him to come to me, inviting him to connect with me, but on his terms. I managed my energy around him and focused on creating “a safe place to be”.  Where any aggression was shown on his part, I would simply and confidently walk away, sending a loving but clear message “this is not how we behave around here”.

I took the opportunity to call Angela – our connection was still there despite years of absence in conversation.  She had some brilliant observations which once again demonstrated her ability to “meet another in their model of the world”.  As a result, the door blocking behaviour was resolved within the first day!

It was great to catch up with Angela and notice how many areas of our work overlapped.  Both our roles rely on sensory acuity: awareness, having the ability to watch and listen and respond to others.  We share a belief in the individual, that they have it within them to express themselves fully and with beauty.  We shared an acknowledgement, a recognition that we are in a system with any person we communicate with and as such a consciousness of the impact of our own actions is critical. We also discussed the idea of working with the information that is available in the here and now, rather than historical frameworks, since we all have potential to change and adapt.

Sid it turned out became the most gentle and loving of cats.  wE introduced him to our other cat Henrietta who at the time was 18 years old (a feral who came from Angela’s rescue centre).  This again was an area to show compassion within – I had to put myself in Henri’s shoes quite a bit, to reassure her, whilst allowing Sid to integrate more fully into our household.  As it happens they built rapport well – after all they spoke “cat” far better than I.

Our tribe currently includes two male cats Broccoli and Pippin. Both Sid and Henrietta are now no longer physically with us, though the memories of them are rich and bring joy as do the memories of Ray and Sunday, other previous members of our household.

So… how is this relevant?

When we build rapport I believe it is essential to be present, attentive and interested in the other person.  Rapport is like a dance where we respond and adapt to one another.  We ask questions such as…

In this sense animals and people have similarities, we share territory space and time, creating our own rules and ideas about one another and our situation.  None of these thoughts and feelings are REAL, they are simply an interpretation, our individual perception of events, which can result in a range of patterns of behaviour.  We may not be able to ask a cat or dog for its core values, yet we can begin to consider what might be important to them as a result of the behaviour we see and therefore begin to develop rapport and mutual understanding.

Behaviour and intention are not necessarily the same thing and this is a lesson we can apply to all our communication with animals or people!

Approaching others with respect, recognition, reassurance and a sense of responsibility, creates a greater likelihood of making real connections.  Adopting a curious and non critical approach is likely to provide more choices in how we relate with one another. 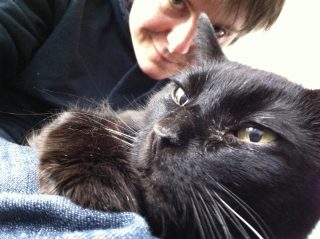 Sid – not “a bad tempered cat” as it turned out!